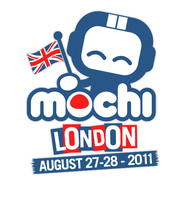 In my last post I wrote about how the Flash community feels in need of a reboot, to align it better with Flash's new users, and its new role as a games technology. Well, events like Mochi London are probably a big part of that reboot. Mochi London is a free 1 day conference, being held this Saturday (27th August 2011) at King's College London.

I will be speaking there with a brand new session called Addictive Game Design - ok, I've borrowed a lot of the content from my 2010 Flash on the Beach talk ;)

The other speakers include Merlin Gore from Flash Game License, and Mike Jones from Adobe, as well as a whole bunch of other developers. It's free but you need a ticket, so grab one on Eventbrite while there are still spaces. There's also a pub gathering on Sunday, but I won't be able to make it to that. Hope to see you there!
events flash game design iain speaking

Tom Thornton said…
Gutted I missed this event at the weekend, yours/sebs podcast is fantastic I am a flash developer who has almost given up client work myself so the podcast is very relevant to me, I imagine putting out an epesodic podcast is trying at times but trust me theres people who enjoy it greatly, keep up the hard work, tell seb not to worry too much about format/style I wouldn't chnage a thing at the moment :D
30 August 2011 at 19:47