I gave this talk at #Digpen, which is a free, informal conference for digital people in the South West, run by Frankie Dolan. This was a brand new talk I wrote on the evening before the conference! I was supposed to do about 5 minutes apparently, but nobody seemed to have told me that, so I did about 15. You'll have to turn your speakers up a bit because I wasn't mic'd up. This was a really fun one to do!
Posted by Iain at 10:36 3 comments:

Contribute a character texture to a free indie game! 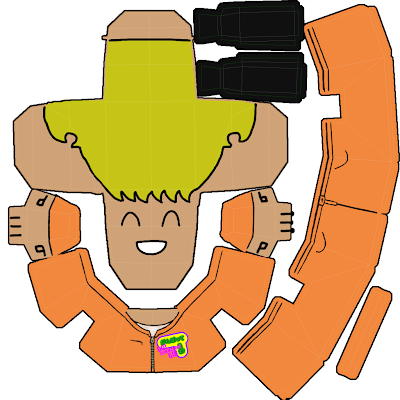 Contribute a character texture to a free indie game! Explay's Dan Stubbs needs 100 textures for his game "Go! Commando Go!". The textures are pretty simple so even a 2D artist should find it easy. Click the download below.

I've been mulling over the idea of writing some kind of book or eBook in the future. Rather than being a set of example games like most Flash games books seem to be, it would arm you with the techniques to create your own games, so when you are stuck on a specific topic it is quick to look up.
The book would be almost completely source-code based (with plenty of comments). There would be almost no "waffle" sections of description. It would be more of a look-up (or copy-paste!) technique reference than a traditional "blah-blah-blah" book. Due to this format I think it would be better as an ebook than a dead-tree book. What do you guys think about that?
Anyway, here are my topic ideas. Could you please let me know if there's anything that should or shouldn't be in there?
Input
- Keyboard input and control (from scratch and using Gamepad library)
- Mouse input and control

Ok, so here’s a book I definitely can recommend! ;-) Away3D 3.6 Essentials by Matthew Casperson (published by Packt) is a really great introduction to creating 3D content in Flash with the free and open source Away3D library. 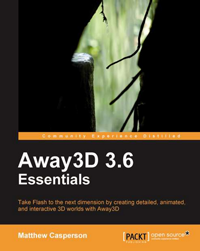 For a brief time in the summer of 2008 I was the golden-boy of Flash 3D after my team at Bloc launched the Papervision-powered game/transmedia experiential play-node called Meta4orce, which I documented to launch my new blog. While my experience and high google ranking for the term “papervision developer” (#2 – boom!) earned me a couple more PV3D gigs, it all tailed off by the end of 2009. The fact that the Papervision3D team pretty-much abandoned development and moved on to new projects didn’t help, but there was also a sense that the novelty of 3D Flash content was wearing off (especially with such jaw-dropping competition as Unity3D’s island demo).
But 3D Flash content was not in fact dead, and the Away3D engine very ably filled the gap left by the demise of Papervision. I never kept up with developments in the Away3D world, so this book was a great re-introduction. So what I have I learned? Well one nice thing to see is that many of the techniques I had to manually create in my Papervision3D work are actually integrated into the Away3D engine itself. This includes things like:
Matthew’s book gives a good explanation of the theory behind these techniques (and many more – the book is incredibly thorough and comprehensive), as well as how to apply them using Away3D. I also learned a bit of general 3D theory about things like UV mapping, triangle Z-sorting and effects like normal mapping and bump mapping. On the whole, though, this book is very much a practical manual of how to use each of Away3D’s features. If I have any criticism, it is that there’s not too much there that you couldn’t get through scouring the documentation and source code, and it doesn’t ever pulled together all the strands to make one amazing demo at the end. That’s up you to go off and do yourself I guess. One really nice addition is that this book does document Away3D’s bugs and offers work-arounds, which could well prevent you from pulling your hair out a few times.
Reading Away3D 3.6 Essentials has really re-opened my interest in Flash 3D, and I think I’m going to do a few experiments with Away3D in its current form, so that when the hardware accelerated magic of Stage3D and Away3D v4 hit Flash, I’m not playing catch-up.
Posted by Iain at 10:07 No comments: