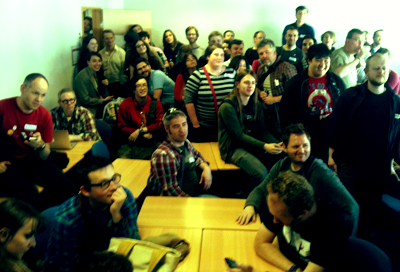 GameCamp4 was definitely the most fun I've had at a conference in a long time. The fact that it was held on a weekend, that people were there for love and not work, the democratic unconference format, the fact that there was a nice mix of male and female attendees - it all added up to a very pleasant day out. There were no dark auditoriums, no videos or keynotes - just lively debate, Nerf guns, zombies, rubber swords, obscure board games and lots of chat about videogames. Here are my takeaways (the ones that I can remember) from the sessions I went to:
The Distillation of Gameplay
2D Art - Pixel vs. Vector vs. Painting
What is the new hotness?
What are indie games?
Flash Games: Design and Business
Emergent Storytelling
LARP 101
Sorry if I missed out any sessions, I'll add them later if I remember them. I definitely recommend going along to future GameCamps - it was a blast. On a related note, I'm also definitely going to check out the brand new Indie Dev Day at Develop conference in Brighton in July - tickets are £50.
Posted by Iain at 10:41

Great writeup! I wish I could have gone.

My two comments:
WoW certainly relies on the same hooks to keep people playing, but it offers the occasional legitimately rewarding gameplay experience (stress on 'occasional' there - it doesn't happen too often).

Some of my best gaming experiences have been on WoW with buddies having impromptu fights with rival guilds in random locations. It's the sort of thing that isn't strictly part of the main aims of the game (and in fact never happens anymore thanks to various changes to the game) but more like emergent gameplay within the game mechanics. It was bloody good fun, though.

All that sort of fun is gradually being patched away, though, in favour of carrots-on-sticks to keep people playing (e.g. flying mounts are desirable and let you travel safely, but remove the possibility of random fights in the wider world as you can always avoid them).


Also, I really enjoyed the gameplay of Mass Effect 2, probably more than the story, but I assume I'm the minority there (or maybe because I played as a Vanguard) :)