Now I have a games portal too! (DullDudeGames.com) 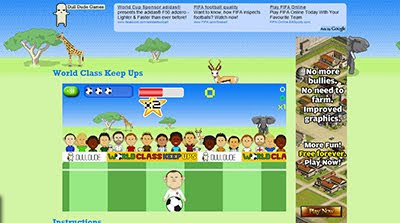 Now I have a portal. There are a lot of Flash games portals out there. Maybe a million, maybe a billion; who can say? And does the world need another one? Probably not. So why have I made one? (OK, enough rhetorical questions now!)
In case you don't know, a summary of how the indie Flash games business works is this:
- Developer makes a game
- Developer licenses game to a primary sponsor and adds branding and links back to sponsor site within the game.
- Sponsor pays developer, and as long as developer didn't spend too long making the game, developer makes a profit.
- Sponsor sells advertising on their site. The advertising (hopefully) generates more revenue than the sponsor paid for the game, so they make a profit.
If you create a game, but don't have a sponsor, you have some surplus value, which is the traffic your game could generate, that doesn't go anywhere. So make your own portal and put some ads on it! Which is what I've done, because I didn't manage to get a sponsor for a little game I knocked up to coincide with the world cup called World Class Keep Ups. Of course, business wise, there's a strong possibility I'm just chasing the loss from World Class Keep Ups and will never get back the (very modest) time investment I've put into setting up a portal.
But there's more to life (and games) than money, which is why I've taken the opportunity to put right some things I think are wrong with many existing portals...
- Too many games. Have you ever heard that truism that if you give someone a choice of 30 flavours of jam they'll end up not buying any of them? The cognitive stress of weighing up all the options actually puts them off buying anything. I think this is true of portals as well. If you have a screen with 100 games in it, how are you supposed to know which one you want?
- Organising games by genre. Personally, I don't like sports games, or arcade games, or platform games, or any other arbitrary category of games. I just like good games, I don't care how you categorise them! I'm not really into sports but I loved NBA Jam, I'm not especially into gory violence but I love Gears of War. I honestly don't believe anyone starts a visit to a games portal by thinking "hmmm... I'm in the mood for a driving game!". I think they just want to play the best game that's out there.
- Tiny thumbnails. Average file sizes for Flash games are at least 2mb these days, even some pre-game/banner adds are nearly that big if they include video. So why do games portals give you a tiny 100x100 pixel thumbnail for each game? This is too small to actually fit a screenshot on, so designers end up just using a logo or headshot of the main character, which doesn't actually tell the gamer much about the game. So I've allowed enough space on my trading-card shaped thumbnail to fit a decent gameplay screenshot.

- Rubbish games. I know as well as anyone that making fun games is very hit and miss. Some games are great on paper, but just don't work when you come to play them. Portals that rely on users to filter and rate games to determine which game are shown, by definition show a lot of duff games to players. This is fine if you have a lot of users, like Kongregate, but doesn't work if you only have a small amount of traffic - it just looks like you'll shovel any s*** on there. Which is why I have hand-picked only games that I enjoyed the hell out of.
- Games get lost on the page. Many portals cram a lot of junk onto a busy layout, meaning the poor games are pretty lost within the page. I've stripped it down to just the essentials: my logo, game title, ad units, game, instructions, more games . I've made everything nice and big and not worried about "the fold" as I trust users to scroll. And best of all my site can handle a custom background and colour scheme for each game, meaning each game gets a full page "takeover" and the whole sites transforms to be sympathetic to the look of the game.
- Burying games too deep. Some sites are hard to navigate because it can take 4 or more clicks to find the game you are looking for. My site has a completely flat structure - there's not even a browse games page or even a homepage! Each page contains thumbnails to the full roster of games, which is never going to get so big that I can't fit it all on one page (after all I have to play and love any game that gets on there).
So there you have it. Enjoy DullDudeGames.com and maybe have a think about what you think a games portal should be?
Posted by Iain at 15:43

i made some similar decisions, and some opposite decisions, for my game portal:

Here's what i've learned in my venerable 3 months of being a portal owner.

1. Custom badges are a great idea, but they were the key factor in keeping me from updating the portal. Every game i added took up to 15 minutes, because i had to build a new badge each time. i've since gone back and overhauled so that i only use custom badges for the Feature (read: really, really good games) - the rest use the default 100x100 badge which, admittedly, stinks.

2. Organizing games by genre. Word Game World is obviously a genre-based portal, so we're taking opposite approaches here. i think certain gamers DO actually say "i want to play a word game." There's no "word game" category in the standard Mochi/Flash Game Dsitribution offerings, so i hope we're filling a niche.

3. Too many games. i think the evidence is against you here ... look at AddictingGames, Newgrounds, Mindjolt, and any of the super-successful portals. Big Fish Games adds a new game every day. Variety, in this case, does not overwhelm ... it keeps people clicking, looking for something they'll enjoy. And with every click, ad impressions.

i have an ace in the hole regarding WordGameWorld that i haven't unleashed on the unsuspecting public yet ... once i do, i'll share my strategy and let you know how it worked.

Good luck! Let me know how you do! WGW is rocking about 2 hits a day, and i think that's from search engine bots. ;)

I really like your site, Iain. Best of luck with it... and looking forward to hearing how it works out for you.