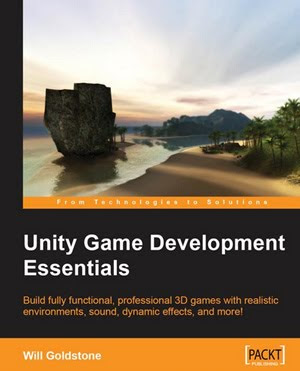 The publishers of Unity Game Development Essentials, Packt, were kind enough to send me a review copy of the book at the end of last year, but I have been so stupidly busy I didn't have much time to read the book let alone post my review. I had originally planned to only read the book while sat in front of Unity so that I could work along with the tutorials, but again time got me so I ended up just reading it on the train. As it turned out this didn't actually cause any problems, and I managed to turn an unproductive commute into some very productive learning time.
The book is basically one long tutorial that shows you how to make a tropical island, set up a first-person camera to walk around it, and create some interaction with the environment, such as collecting objects, opening doors and (don't ask me why) throwing coconuts. Between this book, Unity3d.com's tropical paradise demo and Offroad Velociraptor Safari, you will be forgiven for thinking Unity can only make games set on tropical islands. I assure you this is not true.
Going through these kinds of tutorials is not how I normally learn a technology. My normal approach is to just fire up the editor and start hacking code until something moves on the screen - as I did with Unity last year. However, I have to say that for Unity, which is a very unique, graphical interface driven technology, the approach of going through tutorials is actually better. I learned many techniques from the book (e.g. using the terrain editor, setting up the skybox) that aren't immediately obvious from just poking around the IDE.
The book is meant for a wide audience, including designers, and the code is quite basic, and not necessarily the most "correct" way of working if you're coming from the world of design patterns, MVC frameworks etc. However, I don't see this as an issue, as if you know a better way of doing things it will be trivial for you to refactor the code to meet your needs. The caveat, however, is that the code is all JavaScript, and many Flash guys will be more inclined to take the C# route, despite the obvious similarities between AS3 and Unity's implementation of JavaScript.
The book's main drawback is that at the end of it you haven't really made a "game" in the sense that I understand it. You've made a kind of interactive environment with some coconut throwing. The book's main benefit, however, is that it gives you a nice introduction to all the facets of Unity, from terrain, cameras, physics and prefabs to adding a user interface and menu. Many parts of the book are written just for people coming from Flash, and if that's you, you will definitely be able to go off and make your first game after reading it. Overall, if you're just getting into Unity I think this is a great place to start.
books unity3d

willgoldstone said…
Hi Iain thanks for the review, just a note - the new version of my book updated for Unity 3.x will feature C# and JS evenly and also have a bunch of other new stuff, due out around May.
21 February 2011 at 17:41