Monster Ball: a free iPhone game made with Flash CS5 beta and AS3 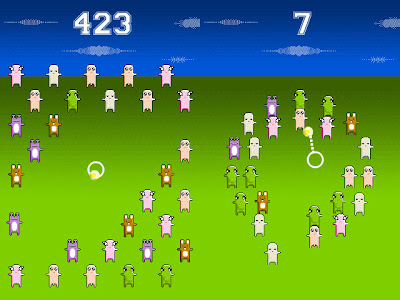 A short while ago I joined the Flash CS5 beta program and started work on my first iPhone game, and just a short while later it is finished and Monster Ball is live on the AppStore! It's a pretty simple game - you swing a ball and bop some monsters. Anyway, it's free, so please go download it. Here's some notes:
Update: A note on performance
ActionScript flash iphone

Unknown said…
Installed without any issues. But as I only have a 3G performance wasn't great. It's still amazing to play a Flash game on an iPhone!

I love the idea of free online flash games and pay versions on the iPhone.

I know we are early in the game, but are there ways to optimize performance for 3G phones when developing in CS5?
23 February 2010 at 09:24

jack said…
Nice blog, here is some more information on iPhone source codes, buy iPhone source codes here at only for $5 useful for learners, students, small companies, small start up companies to get this offer mention this code “PRA” or contact me at sjack.man222@gmail.com
17 March 2010 at 09:46

sevenQ said…
I like it!
But what about this:

Fernand S. , I Play Fast said…
Cool, adobe has re-allowed flash games on iStore, I'll probably give it a shot after seeing so many developers having their games accepted.
19 November 2010 at 19:52