Showing posts from May, 2009
Show All

62% of developers are using FlashDevelop? That can't be right!

May 22, 2009
That provocative title is just to draw your attention to the voting box over there in the right hand column where you can vote for your favourite ActionScript editor. As I write this, it says 62% of you are using my favourite piece of software, FlashDevelop. I don't really believe this, considering the response I got when I stated my preference for FlashDevelop over Eclipse . So vote please! The future of Flash depends upon it. (It doesn't). The poll is over there >>>
3 comments
Read more 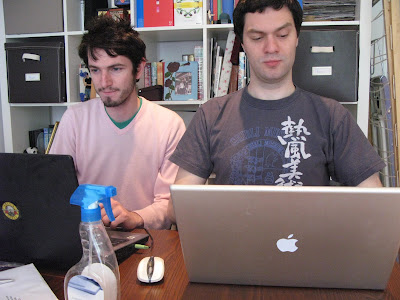 Today I got together with my buddy Adrian who is a big-shot special effects guy, with the aim of trying to punch through the Unity3D learning curve and get some kind of game going. (Adrian is using the Mac in the photo, and for fairness I should point out that he was pulling that face as a joke). Adrian does Maya so he was able to grok the Unity IDE much quicker than me, as there are a lot of keyboard shortcuts you need to know (e.g. press "F" to focus the IDE on a selected object). I, on the other hand, had installed Visual Studio C# Express, so I had intellisense for coding :) Here is my effort - MatrixPong. I had intended to post the actual game, but it crashes Firefox (see below), so I thought I'd give it a miss. All in all it was a very worthwhile session, and here's what I learned: You really do need to learn the Unity IDE shortcuts, e.g. Q, W, E & R to switch between tools, F to focus on the selected object, ALT-DRAG to rotate camera around object, dra
6 comments
Read more

Could Flash autogenerate classes from IDE information at design-time?

May 15, 2009
UPDATE: Chalk this post up to my own ignorance - Simon Cave has pointed out that you can basically do exactly what I proposed by just exporting a swc and compiling with the FlexSDK . Obviously that has it's own advantages and disadvantages, but for the sake of this benefit I'm probably going to move over to that workflow . Here's the original post anyway.... Here's a "what if" post for any developer who works with the Flash IDE . Something that often bugs me is that when you want to access DisplayObjects which have been placed on the timeline of a MovieClip , you don't know what DisplayObjects are there, or their type. For example, say you have an animation, and nested 3 MovieClips deep in the animation is a "hand" MovieClip . You can access the clip with "throwAnimation.leftArm.hand", but while you are developing you can't be sure that this path actually exists, and you won't know the type of "hand". If you want
6 comments
Read more

Do you extend or compose Sprite, MovieClip and DisplayObject?

May 05, 2009
I got such a great response from my last help request that I'm posting another: On my journey to try and be a better developer, I'm questioning some of the fundamental ways I work and organise code. Like most Flash developers (I think), I normally extend Sprite or MovieClip when I want to control something on the stage. But would I be better off creating a class that composes (i.e. controls via a reference) a Sprite or MovieClip instead? What are the advantages and disadvantages? Which are you doing? Leave comments please!
12 comments
Read more

May 04, 2009
I have a question for my learned readers - if anyone has an answer, please leave a comment. Here it is: I'm trying to build a very light reusable framework for my games, rather than starting from scratch each time I start a game. I have a component driven architecture - e.g. Entity model composes a Position component, a Health component, an Ai component, etc. My big question is whether my model composes view components to allow for more than one view of the model, or whether to use a truer MVC where the model does not know about its views, and they are managed externally. I have tried both methods but if anyone knows the pros and cons of each approach and which is the industry standard , it would be great to know. I'd particularly like to hear from people who have tried both methods.
11 comments
Read more
More posts