Creative Commons is a tease!

April 22, 2009
I think Creative Commons licensing is pretty cool. If Flickr and CC images had existed when I was at university doing interactive art projects and learning design, it would have been a massive help. But unfortunately, I think 2 factors have aligned to make it a bit useless to me. These factors are:
If you post an image on your blog, and your blog has ads, that's basically a commercial use, right? If you make a Flash game with CC non-commercial artwork, you shouldn't even upload it to a portal, as the portal will sell ads around it and so make money. Look at Aral Balkan's stitch-up by Sys-Con as an example of the mess that CC can get things into. Should I even post CC images on my blog? It doesn't have ads, but isn't it kinda part of my business?

Case in point: I love this set of CC sprites by Philipp Lensenn 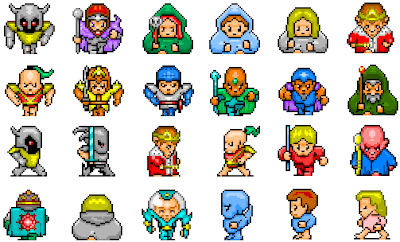 They are brilliant, but to describe them as FREE as is misleading, because they're under a non-commercial license. Basically they're free, as long as you don't really want to do anything with them.

What's the solution? More people should use the commercial licence. But it wouldn't really be fair to, say, make a hit game and a bunch of money without any going to the artist. A better solution - contact the copyright holder and make a deal to share the money. But that scenario is no different than if the images had no CC license at all.

We need to come up with some kind of "revenue share" license, like the royalties radio-stations pay when they play songs on the radio. This way the artist would get a cut, but you wouldn't have to contact them BEFORE you use their work, only once the money rolls in. Would it work? Who knows, but at the moment artists like Philipp might be missing out on a chunk of change because game developers are afraid to use his sprites for fear of breaking the terms of the license.

Thankfully, most code libraries are MIT licensed, which is very permissive, so you don't run into this problem with code. And don't get me wrong - so far I haven't personally CC'd any of my own artwork, but maybe if there was the chance of getting some pocket money from it, I probably would.
art creative commons open source opinion sprites

wonderwhy-er said…
Good post and yeah adding some kind of revenue share would be a good idea and would boost CC even further.
Tough there is range of problems... Firstly how would % of share determined? Again direct and indirect money gaining still exists...
And most importantly what with share-alike with derivative allowance? How would you track that?

So it seems it's kind of hard to do but may be some kind of CC work and their relation indexing platform with payments mechanisms included could work.
23 April 2009 at 08:56

wonderwhy-er said…
Well trust is not that bad in small cases of one2one transactions but CC is meant to be huge.

Lets take for example those icons. Imagine that they are posted under CC-share revenue-share alike-derivation allowed. Then someone takes them and puts in to a presets of tile based RPG game engine. Then people start making Flash based games on it and some even make MMORPG that sells in game stuff...

Hmm may be not best example but it does show that it would scale badly... It will not be about trust already but about possibility to be overwhelmed by derivative works and raising complexity of managing income and sharing it further to people whose works you used.

Actually it even raises yet another question what if some kind of library/game would include like 10 authors artworks and 3 songs and one more effects engine all under CC?

I am not saying that it is impossible to add "share revenue" but it would need a lot of work and thinking to be done it seems... Interesting if there are related discussions on creativecommons.org Will need to check as it is interesting and important topic for CC evolution :)
23 April 2009 at 11:43